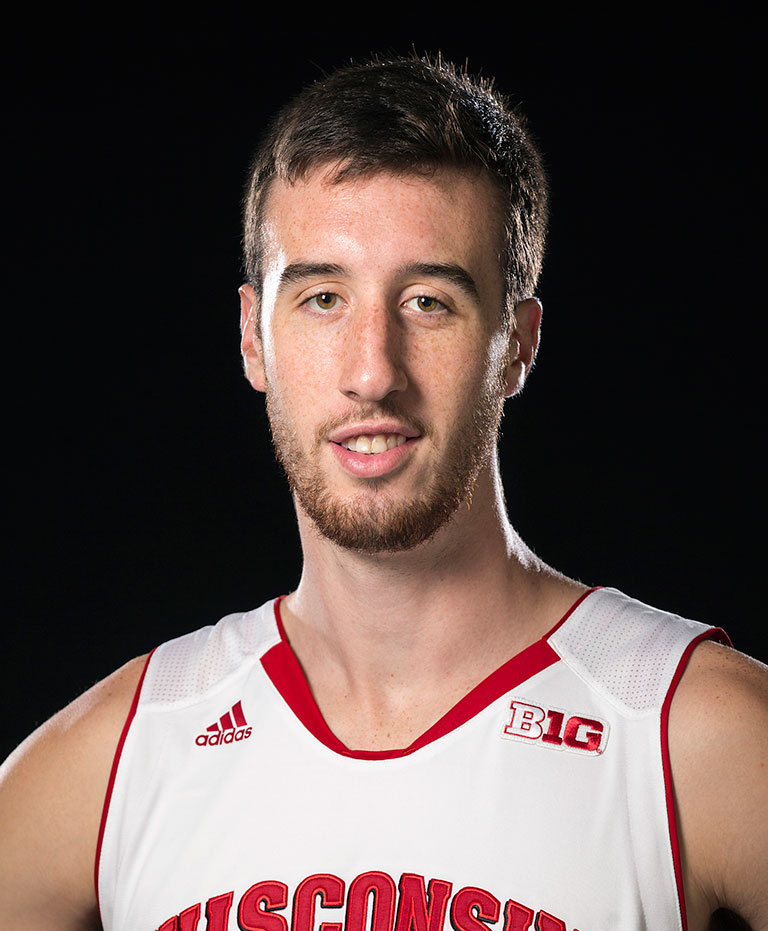 Few players in the country entered the 2014-15 season with as much hype and promise as senior Frank Kaminsky. Somehow he managed to exceed those lofty expectations. The 2015 preseason Big Ten Player of the Year and preseason AP All-American, Kaminsky put together a season worthy of consensus national player of the year honors, winning the Wooden Award, the Naismith Trophy, the Oscar Robertson Trophy, and was also named national player of the year by the Associated Press, Sporting News, Sports Illustrated and USA Today, while garnering consensus first-team All-America honors.

Simply put, Kaminsky did it all for Wisconsin. He was the only player in NCAA Division I to average at least 17.0 points, 8.0 rebounds, 2.0 assists and 1.5 blocks per game. On the season, the 7-footer from Lisle, Illinois, led the Badgers in points (18.8), rebounds (8.2), assists (103), blocks (57), field goal percentage (.547), 3-point field goal percentage (.416), free throws (156) and free throw attempts (200). Kaminsky led Wisconsin to Big Ten regular season and tournament championships, as well as a return trip to the Final Four, where the Badgers bested Kentucky to reach the program's first national championship game since 1941.

The breakout began a year ago for Kaminsky. After averaging just 10.3 minutes and 4.2 points per game as a sophomore, Kaminsky caught everyone's attention during his junior campaign with a consensus first-team All-Big Ten season in which he led the Badgers in points (13.9) and rebounds (6.3), while posting the third-highest block total in UW history (66).

A soft-shooting big man with quickness around the basket, Kaminsky announced his dramatic improvement by scoring a school-record 43 points against North Dakota (11/19/13), and put his lethal inside-outside game on display (6-for-6 on 3-pointers). Just the fifth 7-footer in UW history, Kaminsky displayed a knack for elevating his play at the biggest moments. During the 2015 NCAA Tournament, Kaminsky scored 29 points to lead UW back to the Final Four with a win over Arizona (3/28), then followed up with double-doubles against Kentucky (4/4) in the national semifinal (20 pts, 11 reb) and against Duke (4/6) in the national championship (21 pts, 12 reb). In the 2014 NCAA Tournament, Kaminsky was named West Regional Most Outstanding Player following his 28-point, 11-rebound virtuoso against No. 1 Arizona to send UW to the Final Four.

2012-13
Appeared in all 35 games, starting the first two games of the season ... averaged 4.2 points and 1.8 rebounds per contest ... led the team in free throw percentage (.767) among all Badgers with at least 20 attempts ... scored eight points and grabbed two rebounds against Michigan in the Big Ten tournament quarterfinals ... posted career-highs in points (19), free throw shooting (12-14), rebounds (5) and minutes (23) at Illinois ... tied a career-high with three assists against Ohio State ... recorded a pair of blocks against Michigan ... finished 2-for-2 (1.000) from long range at Indiana ... went 4-for-4 (1.000) from 3-point range against Samford, finishing with 16 points ... posted 11 points on 4-for-6 shooting (.667) against Nebraska-Omaha ... tallied 10 points, three assists, two steals and a block against Presbyterian on ... recorded six points and added four rebounds in first career start against Southeastern Louisiana

High School
Named first-team all-state by the Chicago Sun-Times and the IBCA and second-team all-state by the AP after averaging 14.2 points, 8.7 rebounds, 4.2 blocks and 2.8 assists as a senior ... also named all-area, all-conference and East Suburban Catholic Conference Player of the Year ... averaged a double-double with 13 points, 10 rebounds and 4 blocks per game as a junior ... honorable mention all-state, all-conference and all-area as a junior ... helped Benet post a 26-4 record in 2009-10 and reach the supersectionals, scoring 39 in a state tournament game ... high school coach was Gene Heidkamp

Personal
Parents are Frank and Mary Kaminsky ... has two sisters, Kaylee and Hannah; three step-sisters Jamie, Gabbie and Grace and a step-brother, Steve ... father, Frank, played college basketball at Lewis University where he finished as the 7th-leading scorer in school history with 1,521 points and was elected to the school's Hall of Fame in 1992; also played professionally in South America ... mother, Mary, played volleyball at Northwestern ... aunt, Karen, and uncle, Jim, each played basketball at Northwestern ... majoring in life science communications