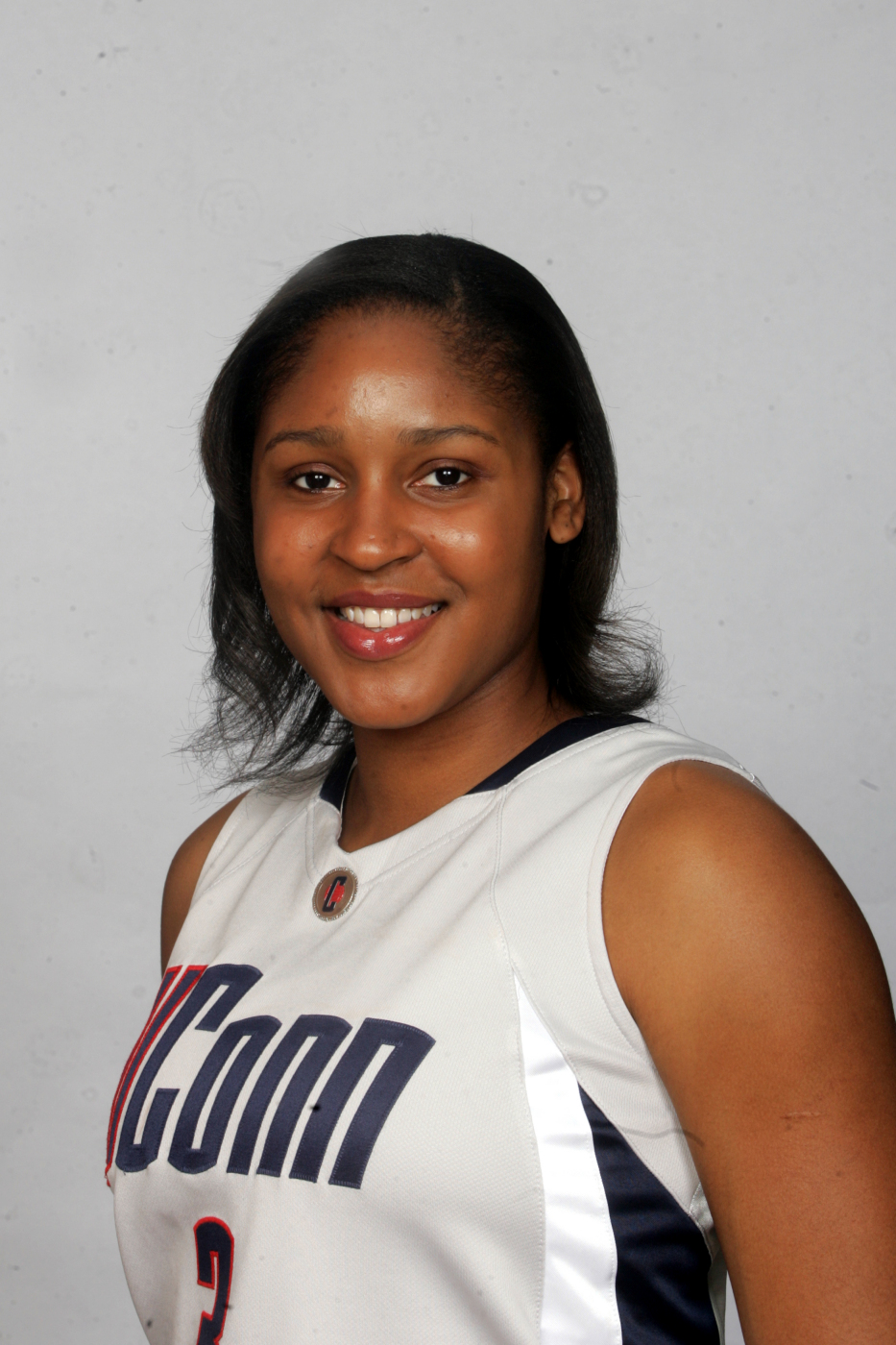 AT FIRST GLANCE
The most prolific winner in NCAA history, Moore led UConn to a 150-4 record over her four-year career, which included four Final Four appearances and two National Championships ... Moore finished her career as the fourth-leading scorer in NCAA history with 3,036 points ... Honored as the Capital One University Division Academic All-American of the Year and BIG EAST Scholar-Athlete of the Year in 2010 and 2011 ... Also honored as a CoSIDA Academic All-American in 2009 ... A three-time WBCA Wade Trophy honoree and four-time WBCA State Farm First Team All-American ... Won the Naismith Trophy, Associated Press Player of the Year Award and USBWA Player of the Year Award in 2009 and 2011 ... John R. Wooden Award honoree in 2009 and is a finalist for the award in 2011 ... One of only two players all-time to earn AP First Team All-America status in each of her four years ... Winner of the 2010-11 Lowe' Senior CLASS Award for women's basketball ... Honored as the Most Outstanding Player of the 2010 NCAA Tournament and voted as the Most Outstanding Player of the Philadelphia Regional (2011), the Dayton Regional (2010) and the Trenton Regional (2009) ... Earned mention on the 2011 All-NCAA Tournament Team ... Named BIG EAST Player of the Year in 2008, 2009 and 2011 ... 2009 and 2011 BIG EAST Tournament Most Outstanding Player... Finished her career with 50 double-doubles and registered double-figure points in an NCAA record 149 games ... 3.669 GPA in sports media and promotion ... Winner of the 2011 NCAA Elite 88 Award for highest GPA of all student-athletes competing in the Final Four.

2007-08 SEASON
Finished season with 678 points - just 16 shy of tying Kara Wolters' UConn single-season record total of 694...played in 38 games, while making 30 starts...became the first freshman in BIG EAST Basketball history (men or women) to be named as the BIG-EAST Player of the Year...only second freshman in history to be named to the Associated Press All-America First Team...named to USBWA All-America First Team...selected as USBWA National Freshman of the Year...also named as the unanimous choice for BIG EAST Freshman of the Year and was a 2008 All-BIG-EAST First Team choice...first freshman in UConn history to be named as an All-America selection...owns BIG EAST Freshman scoring record with current total of 678 points besting Tamara James (Miami, Fla.) previous BIG EAST Freshman record total of 650...ranked sixth among BIG EAST scoring leaders at 17.8 ppg...11th among BIG-EAST rebounding leaders at 7.6 rpg...finished in seventh place among BIG-EAST field goal percentage leaders at .543...ranked fifth among BIG EAST's leaders in three-point field goal percentage at .420....tallied double-figure points in first 31 games this season - tied with Diana Taurasi for the UConn consecutive double-figure scoring record...recorded double-figure points 36 times as a freshman...tallied 20-plus point 13 times...posted 11 double-doubles - which tied for the most by a freshman in both UConn and BIG EAST history and with current teammate Tina Charles...named BIG EAST Freshman of the Week a conference record 10 times - passing former UConn standout Rebecca Lobo (7) for most selections in BIG EAST history...became the first-ever freshman in BIG EAST Conference history to be recognized as Player of the Week on March 4, she was also named Freshman of the Week - marking the first time the conference weekly honors have been swept by the same player....290 rebounds rank as the second-most by a UConn freshman - six shy of Tina Charles' freshman record of 296...116 assists are sixth-most by a UConn freshman...her 59 blocks this season are third-most by a UConn freshman...678 points rank as the most by a UConn freshman, breaking the previous mark held by Svetlana Abrsomiova's (538) tied BIG EAST freshman record with 11th double-double by tallying 25 points and 11 rebounds in Greensboro Regional Semifinal win over Old Dominion (3/30)...also became BIG EAST's all-time leading freshman scorer in Greensboro Regional Semifinal win over Old Dominion (3/30)...dropped 24 points, while shooting 10-of-15 overall and adding 12 rebounds and three blocks in NCAA second round win over Texas (3/25)...tallied 17 points and eight rebounds in opening round NCAA win over Cornell (3/23)...averaged 11.3 points and a team-high 8.3 rebounds over UConn's 3-0 run to the 2008 BIG EAST Tournament championship...tallied 19 points on 8-of-12 shooting while adding seven rebounds and three assists in regular-season finale vs. Rutgers (3/3)...made decisive steal with seven seconds remaining and UConn down by one point allowing the Huskies a last possession which led to a 77-76 come-from-behind win at DePaul (3/1)...posted eighth double-double of season with 16 points and 13 rebounds in win at DePaul (3/1)...dropped 29 points on 10-of-17 shooting while adding three steals in win over LSU (2/25)...recorded seventh double-double of season with 18 points and 11 rebounds vs. St. John's (2/23)...matched season-high with 31 points on 11-of-15 shooting from the field, including a 5-of-7 clip from the 3-point stripe against Marquette (2/20)...also added nine rebounds, three blocks and two steals vs. Marquette (2/20)...dropped 28 points while shooting 9-of-15 from the field and adding 14 rebounds for her sixth double-double of the season in win at Seton Hall (2/9)...scored 16 points on 7-of-14 shooting in win over Providence (2/2)...tallied double-figure points for the 20th straight game with 23 on 9-of-14 shooting in win over South Florida (1/30)..posted 19 points, seven rebounds, four assists and three steals in win over No. 3/3 North Carolina (1/21)...tallied fifth double-double of season with 21 points and 11 rebounds in win over Cincinnati (1/19)...scored all of her 13 points in the second half to lead come-from-behind win at Syracuse (1/12)...also added season-best 17 rebounds for fourth double-double of season at Syracuse (1/12)...dropped 23 points on 9-of-17 shooting while adding seven rebounds and six assists in win at Louisville (1/12)...scored 25 points on 9-of-17 shooting in win over West Virginia (1/9)...registered third double-double of season with 12 points and 11 rebounds while adding six assists at Villanova (1/3)...scored double-figures for 11th straight game with 11 points while adding six assists, four rebounds and three blocks vs. Army (12/31)...notched 21 points on 9-of-12 shooting while adding seven rebounds and two steals in win over Hartford (12/29)...tallied 12 points, seven rebounds, six assists two blocks and two steals in win at San Diego State (12/21)...racked up double-figure points for the eighth consecutive contest with 10 while adding eight rebounds, five blocks and two steals in win over South Carolina (12/17)...extended streak of double-figure scoring outputs to seven with 12 points vs. Virginia (12/5)...registered double-figure points for sixth straight game with team-high 17 on 8-of-12 shooting in win over BYU (11/29)...tallied fifth consecutive game with double-figure points with 12 in Paradise Jam Championship Game vs. No. 9/8 Duke...named most valuable player of Paradise Jam after averaging a team-high 13.7 points over the three games...registered double-figure points for fourth straight game with 10 points to go along with six assists in win over Old Dominion (11/23)...recorded second double-double of season with 19 points and 12 rebounds in win over No. 4/4 Stanford (11/22)...became first UConn freshman since Swin Cash and Tamika Williams (1998-99) to post double-figure points in first two games of career with 31 on 14-of-16 shooting over 19 minutes in win over Holy Cross (11/14)...31 points vs. Holy Cross (11/14) ranks as the third-highest scoring total by a UConn freshman and made her the first UConn freshman in history to post 20-plus points in her first two career games...scored 21 points, the most by a UConn freshman in a debut Jennifer Rizzotti posted 23 vs. Fairfield on Dec. 1, 1992, in season-opener vs. Stony Brook (11/11)...posted 21 points and 10 rebounds vs. Stony Brook (11/11) to become the first UConn freshman since Ann Strother (2002-03) to record a double-double in her first career game...spent the summer playing for the USA U-19 National Team which won at a gold medal at the 2007 U-19 World Championships in Slovakia...scored double-figure points in each of USA's nine games, all victories, while posting averages of 16.3 points and 6.4 rebounds.

HIGH SCHOOL
Only the second player to win the Naismith National High School Player of the Year award following both junior and senior prep seasons...the 2007 Gatorade National Player of the Year...also selected as the 2007 WBCA National Player of the Year...2007 Parade Magazine All-America of the Year...named 2007 Miss Georgia Basketball...two-time McDonald's All-America selection...Guided Collins Hill (Ga.) High School to a 125-3 record during her four seasons, including three state titles and the 2007 National Championship... totaled 2,664 points, 1,212 rebounds, 407 assists and 467 steals during four-year prep career...won four national AAU titles with the Georgia Metros...averaged 25.5 points, 12.1 rebounds, 4.0 assists and 4.3 steals during senior prep season...averaged 23.2 points, 11.3 rebounds, 4.6 assists and 5.4 steals as a junior at Collins Hill H.S...led the Eagles to a 31-1 record as a junior and the Georgia Class 5A State Championship as well as a No. 2 ranking in the final USA Today National Poll...the Eagles' lone loss was a 79-75 overtime setback vs. No. 1 Christ the King High School, which included current UConn teammates Lorin Dixon and Tina Charles, at the Tournament of Champions Final in Arizona... she is the fourth UConn recruit to win the Naismith Award, joining Tamika Williams (1998), Diana Taurasi (2000) and Ann Strother (2002)... Two-Time Parade Magazine First Team All-America choice (2006-2007)... named 2007 Morgan Wootten Award Winner which is presented to the McDonald's All-America Player of the Year - she joins Tina Charles and Nicole Wolff as past UConn recruits to win the honor...won a gold medal as a member of the U.S. U-18 National Team...averaged 16.4 points and 7.9 rebounds at 2005 Nike Nationals...three-time Georgia 5A Player of the Year...three-time Street & Smith All-America Team choice... named to USA Today Freshman and Sophomore All-America Teams...four-time Georgia Class 5A All-State First Team choice...2006 Sports Illustrated All-America Team member...also was an accomplished track and field athlete...finished as the first-place runner-up in the high jump at the 2005 Georgia State 5A Championships...graduated from high school with a 4.0 grade point average...recipient of the Atlanta Journal Cup, the highest award given to a senior at Collins Hill H.S., awarded to the "best all-around" senior, recognizing extra efforts put forth to achieve excellence in academics, leadership and school and community activities...was a four-year scholar athlete.