Catching up with T.J. Ford

Catching up with T.J. Ford

Former National Player of the Year talks about the launch of his new web site, his closeness with other UT players in the NBA, the success of his recent charity event in Houston and the birth of his second child. 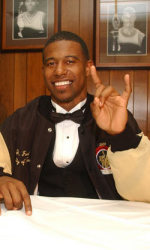 AUSTIN, Texas — Former National Player of the Year T.J. Ford recently completed his fifth season in the NBA and his first with the Indiana Pacers. Ford played in 74 of the team’s 82 games (49 starts) and averaged 14.9 points (third on the team) and a team-high 5.3 assists in 30.5 minutes per contest.

The 2003 Naismith Trophy and Wooden Award recipient as the top college basketball player in the country recently took time to visit with www.TexasSports.com on a wide range of subjects.

Q: We’ve heard you are about ready to launch a new web site in conjunction with several other former UT players who are now in the NBA. Fill us in on the details.

A: Our web site will launch on Monday, July 20 and fans can find it at www.Texas360Now.com. I’m doing the site along with Royal Ivey, Kevin Durant, D.J. Augustin and LaMarcus Aldridge. We’re going to start with some videos of things we’ve been doing this summer. It will show our workouts and the five of us messing around with each other. The site will let people into our worlds and show people who we are. It hopefully can show people what we put into training and what goes into being a professional athlete.

We also thought we should create something that the whole state of Texas can follow. We understand that it can be a hard task for everyone to follow you like they did when we were in college, so basically this site is designed so that you can follow any professional athlete who is from the state of Texas. We’ll also have a high school section, where we will profile the high school kids. It should be a one-stop shop, so we hope all our fans go check it out when we launch it on Monday.

Q: Where did the idea of this site come from?

A: I went to a fashion show in Houston and met a photographer, Dan Rios. I wanted to get some photos done of myself hanging around my house. He dropped by my house and the photos turned out great. Royal and I are obviously great friends, and he liked the photos as well. We talked some more and decided to get the five of us together and shoot some videos of just us being ourselves. We ended up shooting the videos together in Austin earlier in the summer, and it turned out well. We weren’t really trying to create anything but once the videos were shot, so instead of just doing the video we might as well make it as big and as good as we could.

Q: How close are the former Texas guys who now make a living in the NBA?

A: The five of us who are doing this site together are close. The web site is our vision and our ideas together. We’re trying to show people that we do work together and how we keep that bond. We’d like to show people what kinds of things you can do when you show support for one another and put your heads together.

Q: Tell us about the celebrity bowling fundraiser you put on in Houston and how that went.

A: We held the T.J. Ford First Annual Celebrity Bowl-a-Thon that benefitted the Houston Children’s Charity on July 11 over at Houston 300. We put it together in about a month and a half, but it turned out great. We got a great turnout, and we think we raised somewhere between $40,000 to $50,000 in a three-hour period. We had a lot of former Texas Basketball guys (Brad Buckman, Kenny Taylor, Aldridge, Augustin, Durant and Ivey) and Coach Barnes show up, and we also got a lot of support from some football guys, including Casey Hampton and Shaun Rogers.

Q: How did you get hooked up with the Houston Children’s Charity?

A: I’m always looking for a charity to be able to attach my name to, and I definitely liked what I saw when I did my research on the Houston Children’s Charity. I got in contact with a friend of mine who explained to me in detail all the good things that the Charity does for the Houston community. I thought it would be a great opportunity for me to create some awareness and raise money for a charity that has such a well-respected name and does so many things for children in the Houston area.

Q: Speaking of children, you recently became a father for the second time. Fill us in on the details please.

A: We were blessed with the birth of our baby girl, Peyton Elise Ford on June 17. Everything went great, and everyone is healthy. She is at home and keeping me up at night, of course. Our boy, T.J. Junior, is four now, so things are pretty busy at home. I’m looking forward to continuing to be a good parent.